Ra to gain more from trees

VILLAGERS in Ra have been reminded of how much more they can gain from a standing tree than a fallen one.

Minister for Forestry Osea Naiqamu who officiated at the Ra iYaubula Day in Nanukuloa, Ra on Tuesday, December 3 spoke on the importance of conserving forests.

“Fiji is taking a new strategic direction towards achieving real sustainable forest management. Forestry is no longer being treated in isolation from the national interest and the future of our country. Apart from addressing climate change, the Fijian Government also has a responsibility to lay the platform for Fiji’s socio-economic development.

“Part of this includes monetizing the stored carbon in our thriving and expanding forests and mangroves. This new development will result in more returns to the resource owners,” he said.

This is the second year for the event and the focus for this year was on Reducing Emissions from Deforestation and Forest Degradation, Forest Conservation, Sustainable Management of Forests and Carbon Stock Enhancement (REDD+).

The day’s theme was ‘Ko Ra me tutaka na kena valuti na draki veisau ena vakacokotaki ni veikau kei na veibaravi mai na 2020-2025’ (The Province of Ra is making a stand to combat climate change through the sustainable management of our forests and marine life from 2020-2025).

“It is very pleasing to note that the Yaubula Support Management Committee chose this year’s Yaubula Day to focus on Reducing Emissions from Deforestation and Forest Degradation (REDD+),” Mr Naiqamu said.

“This document lays out the plan for Fiji to develop its capabilities to eventually trade in carbon. This acceptance could see Fiji being the first Small Island Developing State in the Pacific to access carbon and climate-related finance from the World Bank,” Mr Naiqamu said.

“Carbon trading could bring benefits to our people and the environment as this means that we could keep our trees standing while also earning some revenue. Forests can be worth more alive and thriving than when they are indiscriminately removed for short-term economic gain.”

CI country program director Susana Waqainabete-Tuisese expressed gratitude to the Chiefs of Ra and Ra Provincial Council for setting aside a day to commemorate the importance of the environment and the important role it plays in our fight towards climate change.

“The second year of the Ra iYaubula Day is progressive in that the Province of Ra has embraced the need to be inclusive and safeguard against the vulnerable members of the society. I am happy to also observe special sessions during the day dedicated to education and health. These are the social fabric of our society that will support improved management of the environment around us and human wellbeing in the long term,” she said.

The day’s event saw competitions amongst villagers for the best poem, song and traditional chants, oratory, buiniga (iTaukei afro hairstyle), best fisherman, success stories on the protection of the environment and traditional handicraft.

Success stories encouraged sharing of lessons learnt through application of Integrated Coastal Management as well as the Ridge to Reef landscape management approach.

All Districts in the Province were encouraged to share a “show and tell” story. The village of Rokovuaka, Nababa sub-district showcased the outcome of their freshwater system “open-close management approach”. The village has a Yaubula Management Support Team (YMST) which has been active for three years now and tasked to look after the freshwater taboo site and raise awareness in the village on the importance of conservation and protection of natural resources.

“This ban is in line with the province’s stance in the fight against climate change by looking after and protecting our eco-system and natural resources. Rokovuaka is taking the lead on this and for that we are proud and hope to be an example for the other villages in Ra to put in place similar measures,” shared Nababa sub-district representative Nemani Nadamu.

Other success stories were also shared by Apisalome Labalaba the representative of the Navolau sub-district who shared that the fisherfolk along the Rakiraki coast can vouch for huge catches along their shoreline.

“In the past when women needed to prepare for any gathering, they would go out in boats to catch enough of sizable fish from the reefs. Nowadays all they need to do is just fish along our shores and they get set size fish and more than enough for the gathering,” Mr Labalaba said.

“I plead with the people of Ra to protect our environment and it will in turn protect us.”

Mr Labalaba is also the chairman for the Ra province’s iYaubula Management Committee which led the preparation and planning for the day.

The district has a marine protected area along the coast of Namuaimada and trees are being replanted by the Ministry of Forestry and iTaukei Land Trust Board along the hills of Navolau.

A total of 500 trees and 400 mangroves were planted by Mr Naiqamu with forestry staff and members of the Fiji Military Forces to commemorate the day. The trees were planted in areas around the provincial council office and the nearby villages of Nanukuloa and Naiserelagi.

The day was also used to acknowledge the elderly and the disabled. Young Naomi Lewakita shared her concerns on climate change at the event. The visually-impaired young lady was at the event on the invitation of an uncle. Naomi is a Year 9 student of Saint Joseph’s Secondary School in Suva.

“It is very hot. The sun seems to be getting hotter and I know that this is due to climate change. It was never this hot before,” she said.

“I’m happy to be here at the Ra iYaubula Day so we can all learn that it is important to plant trees as a province to fight climate change.”

Miss Lewakita hails from Nayavuira Village in Nakorotubu, Ra and has maternal links in Dreketi, Qamea in Taveuni. She was born blind and spent her primary school days at the Fiji School of the Blind before enrolling at St Joseph’s this year.

The young lady was accompanied by her electronic keyboard and roused the crowd at the event by singing a few local and English numbers. While she is obviously musically talented, the teenager has no plans to earn money from it.

“No, I don’t plan to make a living from my musical talent. My ambition is to be a teacher -a primary school teacher,” the soft-spoken young girl said.

She can also play the ukulele and drums. Miss Lewakita also competed in the buiniga category and walked with a cousin to showcase her hair amidst loud cheers from onlookers. 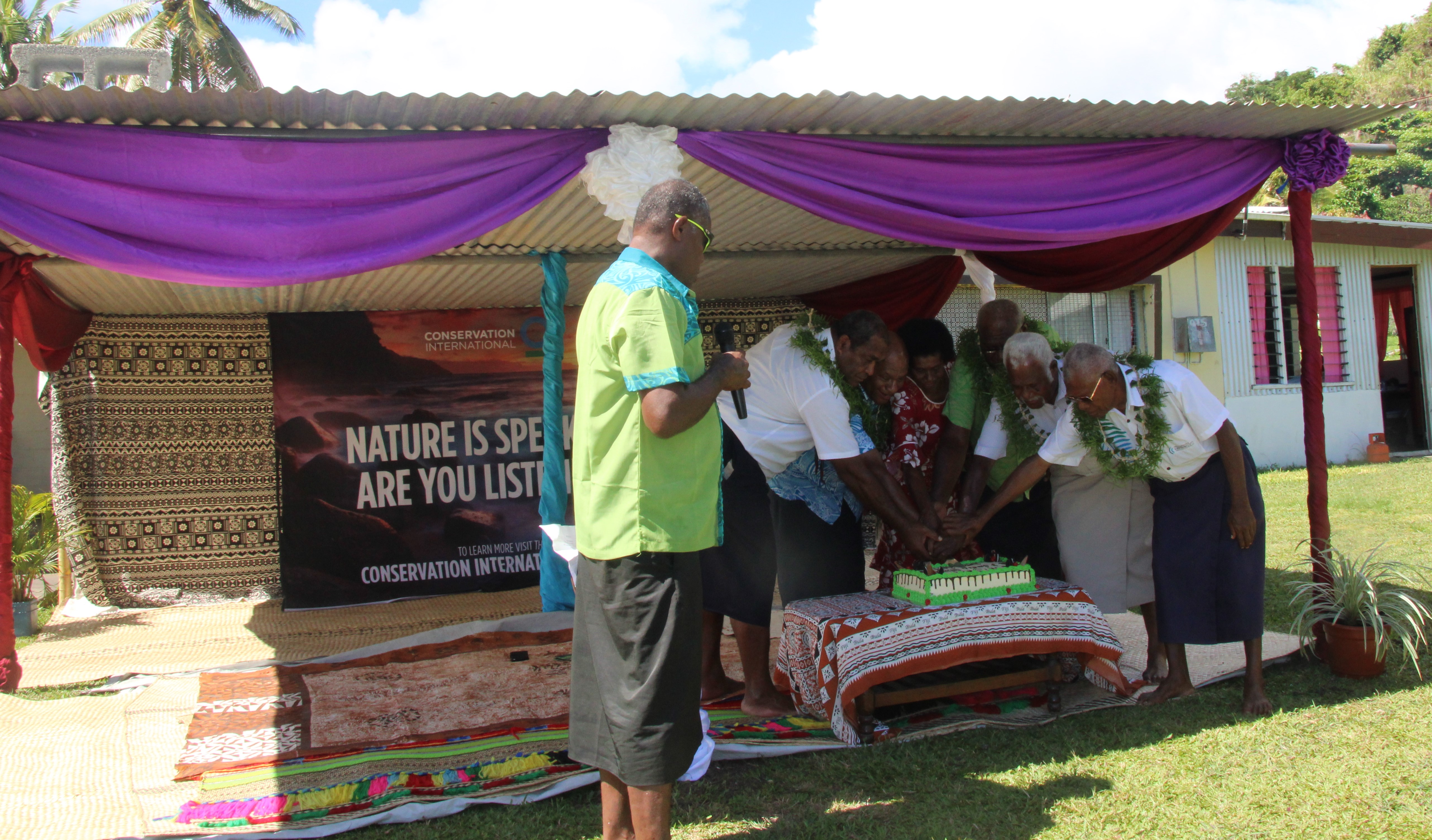