ENVIRONMENT non-governmental organisations (NGO) like Conservation International (CI), World Conservation Society (WCS), Fiji Locally Managed Marine Area Network (FLAMMA) who have been serving in Ra, have been commended by government for the work it is doing around the country.

Minister for Forestry Osea Naiqamu thanked the civil society organisations (CSOs) for their support to communities in the work of conservation and protection of terrestrial and marine resources.

He made the comments as chief guest at the Ra iYaubula Day on Tuesday, December 3 at the Ra Provincial Office grounds in Dadamu, Nanukuloa, Ra.

“I wish to take this opportunity to thank the elders and the people of Ra for your wisdom in working together with Conservation International to address climate change through planting trees. Your initiative will undoubtedly benefit the environment, biodiversity and your future generations. I also thank Conservation International for the great work it is doing with communities around the country,” the Minister said.

“The Ra Yaubula Day is helping Fiji to promote the concept of tree-planting as the most practical nature-based solution to addressing climate change. And for this, I thank you for your efforts.”

This year the focus was on Reducing Emissions from Deforestation and Forest Degradation, Forest Conservation, Sustainable Management of Forests and Carbon Stock Enhancement (REDD+).

CI along with FLAMMA, WCS, USP’s Institute of Applied Science, other partner NGOs and government stakeholders within Ra assisted the Ra Provincial Council in the funding and logistics for the day.

CI country program director Susana Waqainabete-Tuisese was grateful to the Provincial Council for allowing time to focus on REDD+ awareness.

“The Province of Ra is a leader in community-based restoration of degraded landscapes as a result of the Nakauvadra Community based Reforestation Project. We hope that raising awareness on REDD+ will ignite interest among the Chiefs and local communities to participate in the upcoming Emissions Reduction Program,” she said.

“Many villages in the Province already have nurseries with tree seedlings and are well positioned to become early starters in the program spearheaded by the Ministry of Forestry under the REDD+ programme. Participating in the REDD+ emissions reduction program activities will also support the fulfilment of the National Development Plan and would place the Province of Ra as a real champion in the fight against climate change.

“It is exciting to observe how the Provincial Council has taken ownership of the Ra iYaubula Day and have included programs to observe the International Day of the Disabled, a session on education and a session by the Ministry of Health. The integration of social and environmental issues is complementary, making a holistic approach to the sustainable management of natural resources.”

The Ra iYaubula Day is an annual event the provincial office holds to commemorate the importance of the province’s involvement in the fight against climate change.

Activities for the day included oratory, poem, traditional songs and chants, handicraft and buiniga (iTaukei afro hairstyle) competitions. Young girls from the province were dressed in traditional tapa or dresses and showcased their iTaukei hairstyle for judging by Ministry of iTaukei Affairs staff.

Awards were also given to villages that have been the cleanest for the year and those that have lived within Ministry of Health guidelines for healthy living. These were judged by ministry officers and winning villages were awarded framed certificates and trophies to display in their village halls.

A two-hour time slot of the day’s program was dedicated to REDD+ awareness and a question and answer session.

An award was also given to the community considered a success story in the fight against climate change.

This was won by Rokovuaka Village, of the Nababa sub-district, which also claims to be the first village in the Nalawa district to impose a traditional fishing ban on selected rivers within the village, as endorsed by their chiefs.

“The chiefs and village elders observed the grave concern that some freshwater species had become extinct. Therefore, the bose vanua decided that action was needed if we wanted our children and grandchildren to know and see species that can be found in our rivers,” Mr Nadamu said.

“This ban is in line with the province’s stance in the fight against climate change by looking after and protecting our eco-system and natural resources. Rokovuaka is taking the lead on this and for that we are proud and hope to be an example for the other villages in Ra to put in place similar measures.”

The village has a Yaubula Management Support Team (YMST) which has been active for three years now and tasked to look after the taboo site and raise awareness in the village on the importance of conservation and protection of natural resources.

“It is important to note that our children and young people are aware and support the taboo as they know we are doing this for them. Every time there is a report of a sighting of a species, we thought was extinct is made, we gather our young ones and take them to the site to show them the species and its name, so they know,” Mr Nadamu said.

“Villagers of Rokovuaka are witnesses to the good that this ban has brought as evident in the sizes of tilapia and other freshwater species around the taboo site.”

“Thank you, madam director, for the finances and the support rendered by your organisation to the Ra province. We are grateful to CI for choosing Ra as the province to start your work in and for this we say thank you,” Mr Seru said. 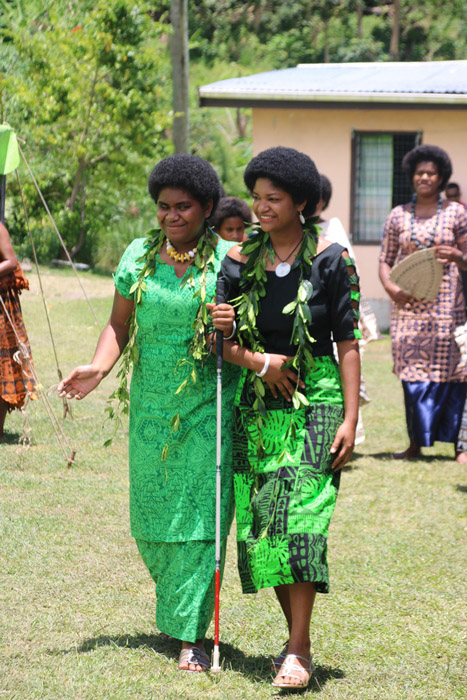